A LONG TIME AGO, the Weilwan tribe had a big camp out near Guddie Springs. The springs had beautiful clear water. But, something happened, to change the water.

The Weilwan people were living quite happily until they noticed, some members of their tribe were missing. One day, the men of the tribe came back from hunting and said they had seen the tracks of Gambil Gambil, a spirit woman, who used to roam from the Ngemba and Murrawarri country.

Gambil Gambil had the power to change into any form; she would even change herself to look like strange Aborigines. It was said that if Gambil Gambil looked at the face of an Aborigine, that person would always be ugly. So the Weilwan people were really worried about Gambil Gambil.

The Weilwans found the tracks of Gambil Gambil. They tracked her to where she had lured away a member of their tribe, by promising to show him where he could easily get plenty of a native honey called Sugar-bag. Judging from the tracks she’d made on the ground, they could see where Gambil Gambil changed into her true form, before she carried away her victim.

Sometimes Gambil Gambil would take her victims down into a deep water hole, or, into the butt of a big tree. Occasionally, she would take them right away to the sea.

In the Weilwan tribe, there was a very wise old Wirrigan. He knew the elders wanted the land, where Gambil Gambil lived. He said, to all the women in the tribe, “Cut your hair and make me a really strong cord from the hair”

When the women made the cord, the old Wirrigan walked slowly out into the bush with the cord and his spear, saying to the elders, “I will chase away Gambil Gambil.” 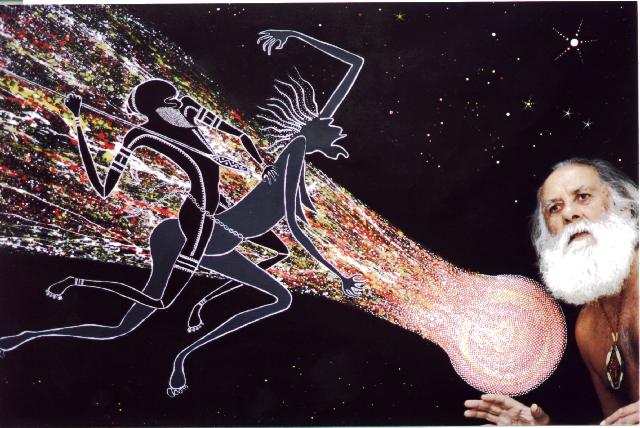