Fire-Keeper story from the Northern Territory area, retold with permission, by Francis Firebrace.

IN THE BEGINNING, the only person who possessed fire was the Fire-keeper, who had a magic stick, which he would use to make fires.

This Fire keeper would show people how to cook meat and other foods, how to use fire for warmth and to light up the darkness of night, to keep away predatory animals and evil spirits.

There came a time when the Fire-keeper was travelling along the coast. As he walked along the way, he met the Fishman who joined him in his travels.

The Fishman became very interested in the magic stick, which made fire and so, the two men became friendly and made camp together. In due course, the fire was lit and, with the smell of food cooking, the Fishman asked the Fire keeper if could he have the Fire stick.

But, the Fire-keeper exclaimed, “No! It’s not possible! In the underwater world, fire and water could not mix. Water will quickly kill the fire in this magic stick.”

When he heard this, the Fishman didn’t believe the Fire keeper’s story. He thought the Fire keeper was being selfish and just wanted to keep it for himself. For hours he plotted and planned to steal the magic stick.

In the middle of the night, when all was still and he was sure the Fire-keeper was in a deep sleep, the Fishman crept forward. He snatched the magic Fire stick, from the sand in which it stood and headed off over the sand dunes, towards his home, deep in the sea. 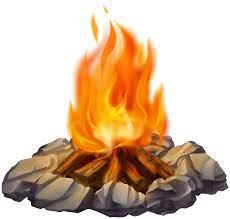