Goolbree – How the Emu Lost Its Wings story is from Northwestern New South Wales, retold with permission, by June Barker

A LONG TIME AGO, in the Dreamtime, Emus were huge birds that had big wings, with beautiful feathers.

One old man Emu was named Goolbree. He was tall, strong and held his head high. Because they were the best to be seen on the plains, Goolbree was proud of his beautiful feathers. There was one thing wrong with old Goolbree. He was a very nasty old fella and was always playing tricks on others.

Old Goolbree was very jealous of the flock of beautiful Brolgas, which camped not too far away. He hated to see them happy and dancing. When the Brolgas knew he was watching them, they would dance even more gracefully.

That beautiful dance would make old Goolbree wild and he would become even angrier, trying to peck at them, whenever they were passing.

It was the same with the Kookaburras. He didn’t like to see them, or hear their laughter, from the big gum trees. Old Goolbree always called them names. Names like, `googlee eyes’. He kept trying to kick sand at the Kookaburras or many other little birds.

Bundah, the big Grey Kangaroo, was the only creature old Goolbree was not cheeky to. This was because Bundah was as tall as Goolbree, who was frightened of the kangaroo’s strong tail and his long sharp claws.

Old Goolbree became cheekier and more aggressive towards the others. In the camp, his manners were no better. Daily, he would send his wives and all the little dennewans out looking for quandongs and other wild berries; even though he knew, the closest quandong tree was many miles away.

The dennewans all knew the quandongs were his favorite of the wild fruits and berries. They walked and walked for miles, but found no quandongs.

One day, when they had walked for miles across the plains, seeking to gather food, a big rainstorm came up. It rained and rained. The rain pelted down and, as there was no shelter, the old wives and little dennewans were soaked to the skin. There was not a dry feather on their bodies.

Buy the book to read the rest of this story… 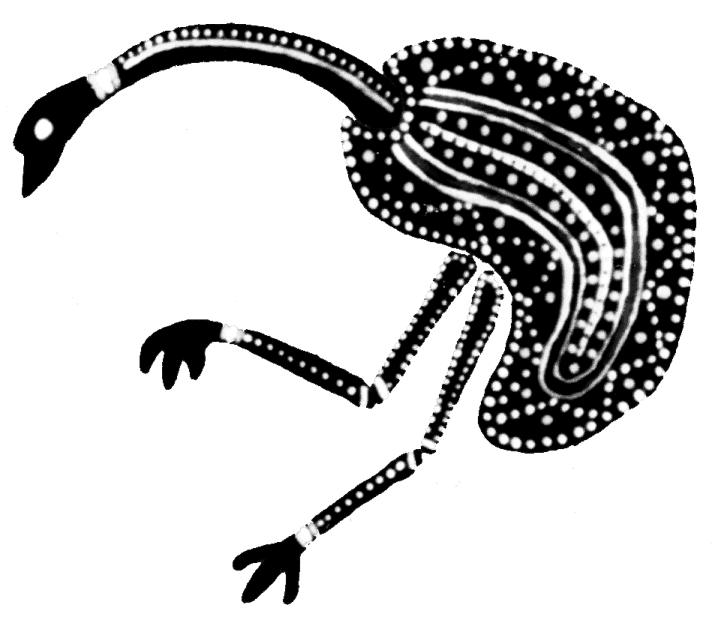