Belah, the Sun Woman story is from the Flinders ranges of South Australia, retold with permission, by Francis Firebrace.

AT THE BEGINNING OF TIME, Belah, the warrior Sun Woman, whose campfire was the only light on earth, at that time, liked the taste of Aboriginal flesh. She would kill, roast and eat anyone she caught. So, all the people lived in fear of the Sun Woman.

At this time, travelling through the country, was a brave warrior called Kudna, the Lizard man, who possessed five boomerangs. He’d performed many incredible feats with them.

So it was, the Lizard man came upon the camp of his friends, the Euro people, only to find that every single one had been dragged off, killed and eaten by the Sun Woman. In a fit of rage, the Lizard man swore, “I will kill Belah, the evil Sun Woman!”

The Lizard man quietly approached her campfire. But, Belah saw him coming. She snarled her hate in his direction and hurled fireballs at him, making the Lizard man shelter behind rocks and trees. Closer and closer, he came.

Sensing the danger, the Sun Woman turned and reached for her spear. The first boomerang left the brown-skinned warrior’s hands, whirring round in a savage arc, striking the Sun Woman with such force, that she fell backwards into her fire, turning the whole thing into a giant fireball, which rolled off the edge of the earth.

Immediately, the whole place was plunged into darkness.

Kudna stood there in the darkness and silence. He’d saved his people from the Sun Woman, but at what cost? Now there was no light, only darkness. He stood there, horrified at what he’d done, not knowing how to bring the light back again.

Then Kudna, the lizard man, remembered. He still had four boomerangs left in his possum skin belt. So he turned to the north, took a boomerang from his belt and he threw it.

Whrrrrrrrr…  and he waited. Nothing happened. The darkness remained.

He turned to the south and threw another boomerang.

Whrrrrrrrr…  and he waited, but again, nothing happened.

Kudna turned and faced the west and threw a boomerang.

Whrrrrrrrr….  but, once again, nothing happened. There was not even a glimmer of light. 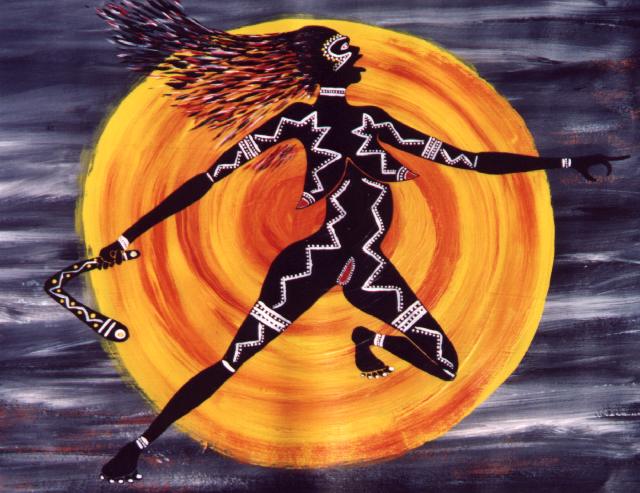