We searched and found many different stories about Mirrabooka.
This one, from South Australia, is the one we liked most.

The constellation, Crux Australis, or the Southern Cross, was regularly used for navigation down though the ages, by both European navigators and the Aboriginal people. It lies a third of the way between the equator and the southern celestial pole. Its stars vary in brightness, one being of the first magnitude, two of the second magnitude, and one of the third magnitude. The neighboring stars Alpha and Beta Centauri are known as the Pointers.

A LONG TIME AGO, when the world was young, Mululu was a great leader of the Kanda people. He had no son, but he had four beautiful daughters whom he loved dearly. Throughout his life Mululu protected and cared for his daughters, but when he grew old he knew he would need to make some plans for their future.

So he called his daughters to him, saying, “My daughters, I am getting close to the end of my life and will be leaving the Earth soon. I don’t want to see you forced into a marriage with a man you dislike. You have no brother to protect you from the spite and jealousies of the other women. So when I leave, I would like you to join me in the sky.”

The sisters reacted to his words with fear.

Seeing the fear reflected in their eyes, he reassured them, saying, “My beloved daughters, don’t be afraid. With the aid of the night spirits, I have visited a clever medicine man called Conduk. He is willing to help you reach our new home, where I can continue to care for you.” 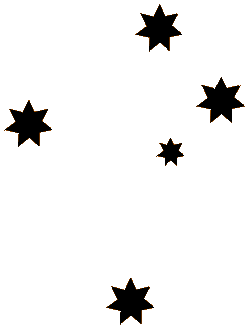