This is a rainbow serpent Creation story from the Northern Territory, retold with permission, by Francis Firebrace. The rainbow serpent can be either male or female, depending on where the story is told. In this story the snake is female.

IN THE BEGINNING, the land was flat and the great mother snake lay in a deep sleep, in the centre of the earth. For a long, long time she slept. Eventually, she awoke and crawled up through the earth, breaking through the surface, in a shower of ochre dust.

As she journeyed slowly across the flat, empty land, so powerful was her magic that she caused it to rain heavily and the tracks her body left were filled with water. This created long winding rivers, great lakes, billabongs, and waterholes.

Everywhere she traveled, nurturing milk from her breasts soaked into the earth, making the land fertile. Lush green rainforests with hanging vines grew, while trees of many shapes, colors and patterns, sprang up out of the ground.

By dipping her nose into the earth, she created mountain ranges, hills and valleys. Some parts of the land we now call desert, she left flat.

Then, returning back into the earth, she awakened the animals, reptiles and all the other land-dwelling creatures.

Some animals carried their young in a pouch, some laid eggs, some lived in the trees and others burrowed under the ground. There were desert animals, and forest animals, as well as reptiles of all sizes, colors and patterns, and Lumarai took them all to live on the surface of the earth.

She then awakened the tribes of birds and placed them in the air. Immediately, the sky was filled with birds of all the colors of the rainbow, like the myriads of parrots, and other birds, of many different shapes and sizes. 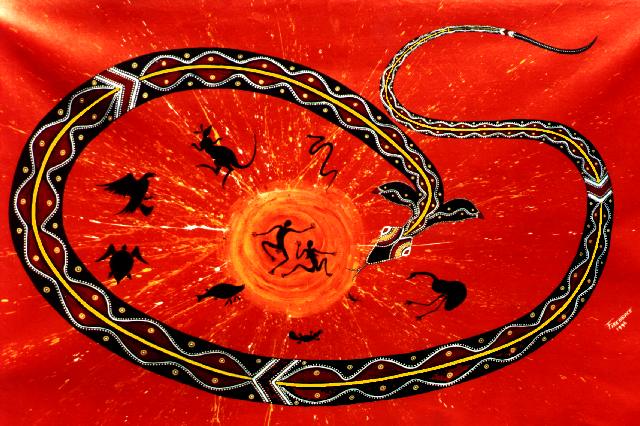