Gadi Mirrabooka, which means Below the Southern Cross, contains thirty-three Dreaming stories from the Australian Aboriginal culture, recognized as the oldest continual culture on earth.

The storytellers, who have shared stories for Gadi Mirrabooka, are all respected Aboriginal cultural educators, who use their knowledge to educate their younger generation, as well as, the wider Australian community. The stories have not been altered or sanitized for specific audiences, but are authentic oral stories, passed down through many generations. All have been approved for public telling.

The Dreamtime; the period of creation before time – as we know it, existed – is known to the Aboriginal people as the Dreaming, where the very essence of human nature came to be understood. The lessons of this period of enlightenment; the ability to live in peace and harmony with all around you, are encapsulated within the Dreaming and passed on to the next generation in the oral traditions.

The art, stories, the songs and the dances, became well known as part of the Dreamtime, but it is still little understood and very hard to explain. The Dreamtime is part of the oral tradition and is only one aspect of the very complex spiritual belief system.

The Dreamtime stories are the verbal form of the spiritual Dreaming, which comprises:

Altogether, they form an all encompassing mystical whole. Over the last 200 years, since colonization, non-indigenous people have perceived these art forms as separate entities, rather than, as part of a whole. The result has been a fragmented overview of the culture.

The Stories of the Dreaming are more than myths, legends, fables, parables or quaint tales. They are definitely not fairytales for the amusement of children. Down through generations, the Aboriginal people’s stories, told, but never written down, were the oral textbooks of their accumulated knowledge, spirituality, and wisdom, from when time began.

The structure and form of a traditional Dreaming story is quite unique and cannot easily be copied. An oral Dreaming story of ten minutes’ length, can cover several topics and subject matters, and be suitable for all age groups. They are structured with valuable lessons for children or, for bringing a renewed understanding to older people.

For instance, twenty or more lessons can be found in one story, teaching such topics and subject matters as:

For instance; the stories – `Brolga’ and `First Platypus’, are excellent examples of Stranger Danger, and `The Murray Cod’ is a Creation Map story.

Every genre of storytelling and hundreds of categories are used, within the Dreaming stories, such as:

The Dreaming stories are not specifically related to time, as time was not important for the story to become part of the oral tradition. The important issue is the event, which occurred and affected the people, the land and the culture.

Research into animals, described in traditional Dreaming stories, corroborates the existence of these creatures of the Creation and megafauna, which existed in other periods of world history. Many of these animals are now extinct, but their remains have been discovered by archaeologists.

Some examples of these are:

Many of the `Dreaming stories refer to an Aboriginal group’s creation time, for instance; `Rainbow Serpent Dreaming’ or ‘Honey Ant Dreaming’. Their ancestor spirits arrived here at the time of creation in human and animal spirit form and are now encapsulated in the Stories of the Dreaming associated with that group of people.

New Dreaming stories are being continually added to those already in existence. Stories of islands pushed along by clouds were of the sailing ships of the 1700’s, with their strange men from across the seas. The Aboriginal people perceived them as ghosts, or evil spirits, but, in fact, they were the colonists of 1788 to the 1950’s.

Tales abounded of hoofed, four-footed, monstrous creatures with two heads that stank like bunyips (water demons) and defiled nature – men on horses. Stories of other objects were told, that could only be described by the sounds they made. There is no word in any Aboriginal language that could describe such a creature. They were known as `chuggasshhhh-chuggashhhhhh’ and were the early paddle steamers on the Murray River.

The stories of the `flying ships’ of sixty years ago – airplanes of the 1940s – totally amazed and terrified those people of the interior, who had never seen them.

The most recent Dreaming stories are of `the black cloud of Maralinga’ – the atomic testing grounds of the 1950’s, `deaths in custody’ and `removed or stolen children’ – a time, better known to the Aboriginal people, as the Screamtime, Nightmare period of history.

The lessons within a Dreaming story are not taught directly, but are assimilated by repetition. Understanding of the story is acquired from life experiences, as a person grows to maturity. When the time comes for that person to keep the oral tradition alive, by passing the stories on in their entirety to the next generation, it can be done correctly and without distortion.

In the retelling of a Dreaming story, the traditional Aboriginal oral storyteller can use virtually every form of theatre known, to pass on the culture – unlike the Irish Seanachie, who just sits and tells the story. This telling can take the form of solo performer, or troupes; using music, song or simply telling without aids.

In addition, the story may be told in plays, pantomime, dances, and in the visual art forms, which often accompanied the telling. Facial expressions, hand movements, vocal variety, mime – both vocal and physical – was, and still is, very important in the presentation of a Dreaming story. There are strict requirements of a traditional storyteller, imposed by the elders, of an individual’s personal knowledge of cultural laws and custodianship.

Symbolic languages, such as the map-like dot pictures and cave paintings and carvings, were used throughout Aboriginal Australia to record information. A written language was never developed or used.

There is no universal Aboriginal language, as there are approximately 700 Aboriginal tribal groups, each with their own dialect. On top of this, there are regional languages, common to many groups within a region, such as the Murray River basin region, or Kimberley.

According to the land regions and the creatures’ habitat, there are as many different versions of a core story, as there are tribes. These may differ in that, the animals or other creatures in the story, may be changed to fit the regional landscape of swamps, rivers, mountains, plains or coastal land areas.

The Aboriginal people do not believe in land ownership; rather, they see themselves as custodians of the landmass, known as Australia. They believe the time has now come for the Aboriginal people, who have survived many changes, both natural and man-made, to share – not only their culture – but also, the wisdom and experience of the Dreaming. The elders have given permission for stories, including some previously secret stories from The Dreaming, to be disseminated.

Through these stories, which teach us to care for the land and one another, we catch glimpses of the great diversity within Australia – of its people, animals, and landforms. The stories in this book offer a comprehensive glimpse of the Dreamtime.

Included are stories from many vastly different regions of Australia. There are stories of Creation, Spirits, diverse languages and, of course, the Constellations; the stars of the Southern Cross and Milky Way. There are creation stories, animal stories, map stories, a space story, love stories, heroic stories, some with strong moral values, stories which warn of dangers.

They are collected from all over Australia, to allow the reader to understand more about the oldest continuous living culture on earth. The more often you read them, the better you understand the messages they contain.

Since time began, the Aboriginal people have been here in Australia. The original people lived a semi-nomadic lifestyle, based on their oral tradition and existence as hunters and gatherers, who traded or bartered their excess produce. Wherever these groups gathered, whether for trade or tribal ceremonies, stories were exchanged and information offered, of the presence of animals, for hunting and other food sources.

It is a popular belief that the Aborigines migrated to Australia some 40,000 years ago, but that theory is now being disproved by archaeological discoveries made in very recent times. For example: Mungo man and Mungo Woman, whose remains were discovered in the 1960’s at Lake Mungo, near Wilcannia, New South Wales, are believed to be of much more ancient origin than at first thought. Studies have proven their existence at more than 56,000 years ago.

Stories from the Dreaming, or the First Time are the cultural property of the Australian Aborigines. To pass them on, without first obtaining permission from the traditional owners, would in their eyes, be stealing.

If you find an Aboriginal story, which is not in this book, you should first identify its source and try to obtain permission to tell it. All stories in this collection have received permission for the Aboriginal contributors, to share them. 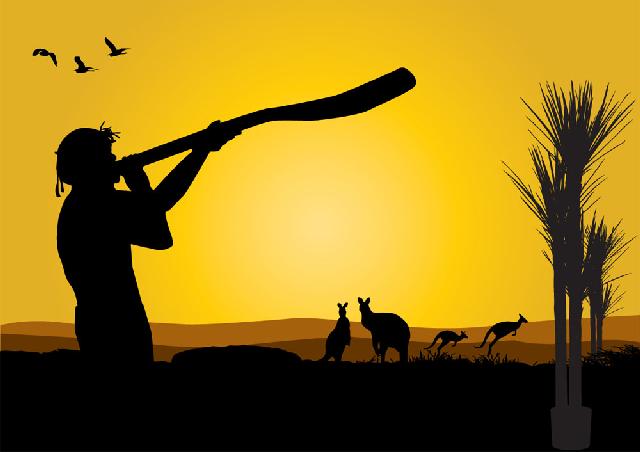